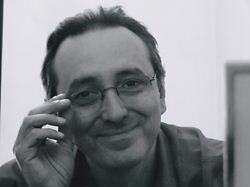 Paolo was born in Florence. He graduated from the Conservatory of Ferrara, where he studied piano under the guidance of Fabrizio Lanzoni.
Following his degree, Paolo attended a course held by Pieralba Soroga to become specialized in “Reading and Interpretation of Music”, designed for the study of musical scores as well as for teaching and accompanying opera singers. He also attended a series of lessons dedicated to the study of the organ and its literature by Vincenzo Ninci.
For many years he was a collaborating pianist in the vocal technique class at the Music School of Sesto Fiorentino.
Paolo was a collaborating choral director for the University of Siena during the 2003/2004 academic year and for the choral society “Guido Monaco” of Prato.  In both instances, he was under the direction of Lorenzo Fratini, who is now the head choral director at the Teatro Verdi in Trieste.  He works periodically with the “Harmonia Cantata” chorus led by Elisabetta Sepe, who has been a collaborating director of the Teatro Comunale of Florence for many years.
During the summer of 2005, Paolo participated in a national specialization course for vocal chamber music as an accompanying pianist in Vezzano, Ligure. He continues his musical studies at the Conservatory of Florence, in Leonardo De Lisi’s  vocal chamber music class and at the G. Verdi music school in Prato, and in Monica Benvenuti’s singing class.
During the 2006/2007 academic year, the Conservatory of Florence awarded him a scholarship as a didactic collaborator.

He currently teaches piano at the S. Caterina Musical Academy in Sesto Fiorentino and at the Istituto Europeo the Music School of Florence, where he also holds vocal chamber music lessons and periodic conferences dedicated to the reading of Italian opera librettos.