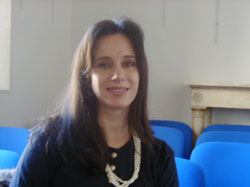 Born in Stockholm, Sweden, Susanna finished her musical training at the Luigi Cherubini conservatory in Florence and successively completed her specialisation with Iris Adami Corradetti, under whose direction, she was recognised and awarded at the International “Maria Callas” Competition (Concorso RAI 1983) and “Sängerförderungspreis” at the Mozarteum in Salzburg 1985.
She has performed in Italy’s most prestigious theaters: la Scala in Milan, Maggio Musicale Fiorentino, La Fenice in Venezia, the Opera house in Roma, Filarmonico in Verona, Massimo in Palermo, Regio in Parma, Bellini in Catania, Comunale in Bologna.
She has also sung at: Carnegie Hall in New York, Opéra Comique and Théatre Châtelet in Paris, Prague Philharmonic, Queen Elizabeth Hall in London, Opéra de Wallonie in Liège, Sibelius Academy in Helsinki, Fundaçao Gulbenkian in Lisbon, Wexford Festival, Teatro Municipalein Mallorca and Staatteater in Bern.
Her lyrical Soprano repertoire revolves mostly around the Italian Baroque (Vivaldi – Scarlatto – Cimarosa – Galoppi – Pergolesi – Boccherini – Stradella – Gasparini – Sacchini), of which she has made several recordings with the Solisti Veneti directed by Maestro Claudio Sciamone (Erato) and also for the labels Philips and Bongiovanni. She has completed a brilliant Rossini and Donizetti repertory (Don Pasquale – recorded for German television -, Elisir d amore, Figlia del reggimento, Il Signor Bruschino, Barbiere di Siviglia, La cambiale di matrimonio) and 19th cent. Italian and French Belcanto.
Susanna is also versed in the contemporary repertory, having performed for prestigious societies such as: La Biennale in Venice, London Sinfonietta, RAI in Rome, Turin and Milan, Orchestra dei Pomeriggi Musicali in Milan, Orchestra Sinfonica Siciliana, Festival di Ghibellina.
She has interpreted Webern, Berg, Schönberg, Berio, Nono, Sciarrino, and has performed compositions of Togni, Pennisi, D’Amico for the first time in public. She was also the protagonist of the first Italian performance of The English Cat by Henze at the Comunale in Bologna.
Susanna sings in 6 languages and alternates her concert activity with that of refined chamber music.